Stuttgart. Naomi Osaka, Anett Kontaveit, Petra Kvitova and Kiki Bertens – the four world class players will do battle on Saturday for a place in the Porsche Tennis Grand Prix final. 4,400 spectators in the Porsche Arena, which was once again sold out, were treated on Friday to thrilling and hard-fought quarterfinal matches – and saw the last appearance of the Wimbledon champion Angelique Kerber at the 42nd edition of the long-standing Stuttgart tournament.

Angelique Kerber exits
“I’m naturally disappointed but I there’s nothing I have to be sorry about. I gave it my all and left everything I had out there on court,” said Angelique Kerber after her two-set 6-3, 6-4 loss against Kiki Bertens. For a while in the second set, it seemed as if the Wimbledon winner might turn the match around but whatever she attempted, the strong-serving opponent always had an answer. With the defeat still fresh on her mind, Angelique Kerber nevertheless looked forward towards the French Open, the second Grand Slam of the year. “I’ll give myself a couple of days off to return to full fitness and will hone my clay court tennis in the lead-up to Paris. That’s the plan.”

After first-round losses in both 2017 and 2018, reaching the semifinal this year is the biggest success ever for Kiki Bertens at the Porsche Tennis Grand Prix. The Dutchwoman will now play the Czech Petra Kvitova.

Petra Kvitova made to work hard
It was not an easy day at the office for Petra Kvitova. The world number 3 and leader of the Porsche Race to Shenzhen, the official qualification ranking for the prestigious WTA Finals in November, was forced to dig deep in the day’s first encounter. Anastasija Sevastova proved to be the expected tough opponent and forced the favourite to pull out all the stops when winning 2-6, 6-2, 6-3. The Latvian raced into a 4-0 first set lead and all Petra Kvitova could do was watch and applaud her opponent’s shots. “I have no idea when I last started a match so badly,” said the Czech after advancing to the semifinals. “I made too many mistakes and Anastasija hardly made any.” The two-time Wimbledon winner took the second set relatively easily and although Anastasija Sevastova was not going to lie down in the third, she was unable to put the Czech under any real pressure.

The reward for all the hard work is a third semifinal appearance in Stuttgart. Kvitova has never gone any further in the Porsche Arena, something she will want to redress on Saturday. She is however well aware that if she wants to win the tournament “then I’m going to have play better or it’s not going to happen”.

Naomi Osaka wins tennis thriller
There was a sensation in the air in the Porsche Arena. The second quarterfinal between the two youngest players (Osaka is 21, Vekic 22) left in the tournament had long become a real thriller. Naomi Osaka, the world No. 1 from Japan, looked to be heading for defeat when 5-1 down in the third and final set against the Croatian Donna Vekic, the number 25. However, the two-time Grand Slam champion clawed her way back into the match to force a tiebreak which she clinched 7-4 on her second match point. On the edge of their seats for much of the final set, there was nothing holding the spectators there anymore and the Porsche Arena was turned into a mad-house.

“I was obviously in trouble when I was so far behind in the third set. But I didn’t want to regret anything afterwards,” said Naomi Osaka. “It’s why I fought and tried to be consistent. I wanted to have good memories of this tournament.”

Her opponent in the semifinal is Anett Kontaveit. The Estonian profited in the last quarterfinal match of the evening from the retirement due to injury of her opponent Victoria Azarenka with the score at 5-7, 7-5, 3-0. 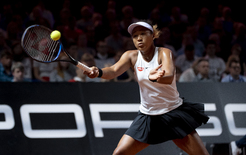 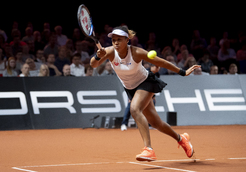 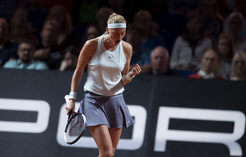 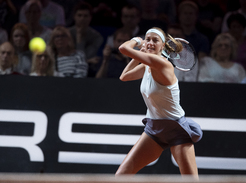 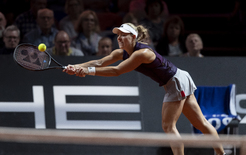 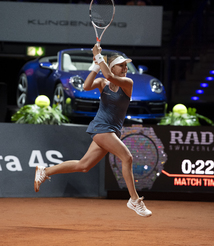 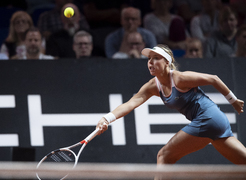 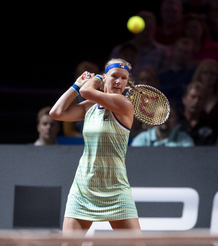 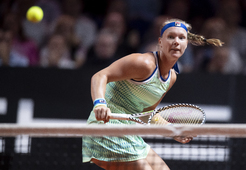