Stuttgart. Wednesday was a thrilling day at the Porsche Tennis Grand Prix. It contained an impressive comeback from the Swiss Belinda Bencic and the first appearance of Petra Kvitova, the world No. 3 from the Czech Republic, in the Porsche Arena. Thursday’s play however promises even greater things as the Japanese Naomi Osaka will enter the fray and Angelique Kerber and Andrea Petkovic will face each other in an all-German duel. It all will have no bearing on Julia Görges as the 2011 Stuttgart winner was forced to retire with a neck injury much to the disappointment of the 4,000 spectators.

Petra Kvitova is the first quarterfinalist
Petra Kvitova has already taken the first hurdle. The leader of the Porsche Race to Shenzhen, the official qualifying ranking for the prestigious WTA Finals in November, cruised through her opening match on Wednesday evening. After receiving a first-round bye, the double Wimbledon champion (2011 and 2014) became the first player to advance to the quarterfinals after recording a two-set 6-1, 6-4 victory against the Belgian qualifier Greet Minnen. It means she is the only main draw player with a day off on Thursday – all the rest will be in action.

Belinda Bencic has also advanced to the last 16. The Swiss, whose win in Dubai and semifinal appearance in Indian Wells have returned her back to the top echelon of women’s tennis, won against qualifier Mandy Minella (Luxembourg) 6-2, 6-4. Her next opponent is the Top 10 player Kiki Bertens from the Netherlands who is sure to provide a stiffer test. “I hope I can move up a level,” said Bencic who teamed up with Roger Federer at start of the year to win the Hopman Cup, the unofficial mixed world championship, for Switzerland. “Clay is definitely not my favourite surface, but I’ll give it my best shot and can only hope it’ll be enough for Kiki.”

The round of the last 16 will see two former world No. 1s go head-to-head – the two-time Grand Slam winner Victoria Azarenka from Belarus will face title-holder Karolina Pliskova after beating the Russian Vera Zvonareva 7-5, 6-4. Another player to receive a first-round bye, the Czech will also be making her first appearance this year in the Porsche Arena.

Bad luck for Julia Görges
Julia Görges has however exited the tournament in unlucky circumstances. The 2011 Stuttgart winner won the first set 6-4 against the Russian Anastasia Pavlyuchenkova but then lost the second 6-2. After quickly going 4-0 behind in the third, she was unable to continue and retired. “I’ve been suffering for a while now with a neck injury. It was also the reason why I couldn’t play the second Fed Cup singles against Latvia,” she said. “I really wanted to play in Stuttgart and tried everything to prepare as best I could for the tournament. But now I have to just listen to my body and do the right thing to get 100 per cent fit again.”

Awaiting Anastasia Pavlyuchenkova in the last 16 is the Estonian Anett Kontaveit who ousted Caroline Garcia (France) 6-4, 6-3. Another player in round two is Donna Vekic (Croatia) after her 6-1, 7-5 success against Giulia Gatto-Monticone (Italy). Her next opponent is the Russian Daria Kasatkina, one of the most improved players in 2018.

Naomi Osaka back in Stuttgart as the number 1
Thursday’s schedule promises a whole host of tennis highlights. With the exception of Petra Kvitova, who has already successfully negotiated her first hurdle, all the tournament’s top stars will be appearing on Centre Court in the Porsche Arena. Of particular interest is the duel between Angelique Kerber and Andrea Petkovic, two Porsche Team Germany players. Petkovic sees herself as the outsider in the encounter against the two-time Stuttgart winner and reigning Wimbledon champion. “My game suits Angie’s,” she said. “I have to get out of my comfort zone if I’m going to beat her. But I’m really looking forward to the match. Perhaps I can make life difficult for her.”

The Stuttgart crowd is eagerly awaiting Naomi Osaka’s first appearance this year. Two years ago, the Japanese was playing qualifying at the Porsche Tennis Grand Prix, now she is returning as the new superstar of women’s tennis and the world number 1. “I don’t have the best record here,” said the double Grand Slam winner and – aged 21 – the tournament’s youngest player, ahead of her opening match Su-Wei Hsieh (Taipei). “But I hope I’ll have a lot of fun here. And I want to experience the German fans. They are said to be very special and support all the players so fantastically.”

Difficult task for Laura Siegemund
Laura Siegemund has a tough nut to crack. The local hero was given a main draw wild card and opened her tournament campaign with a comfortable first round win much to the pleasure of the Stuttgart crowd against Lesia Tsurenko (Ukraine). She will face Latvia’s Anastasija Sevastova who downed her compatriot Jelena Ostapenko, the 2017 French Open winner, in the first round. “Sevastova has been really impressive here,” said Siegemund with great respect. “She’s a player you have to beat several times in any one match.” 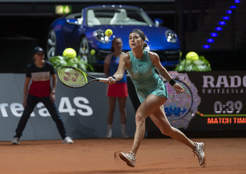 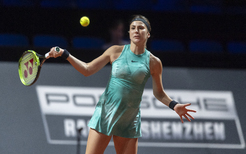 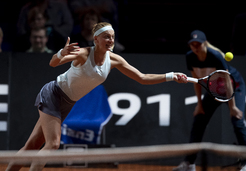 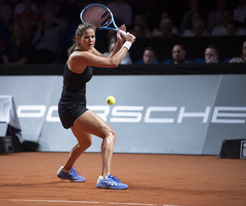 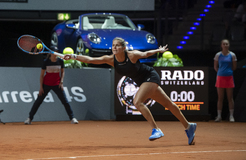 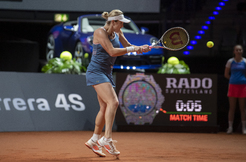 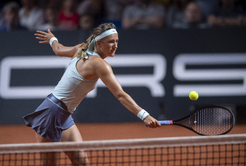 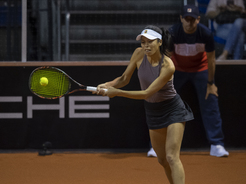 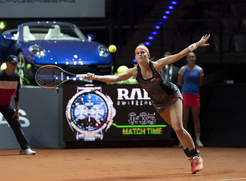