Stuttgart/Hamburg. A direct hit on his 400th Tour start: German golf pro Marcel Siem won a Porsche Panamera Turbo Sport Turismo when he aced the 17th hole at the Porsche European Open in Hamburg on Saturday. On his 400th European Tour start, the 37-year-old Rhinelander took his 7 iron and scored a hole in one at the spectacular 170-yard, par 3 hole on the Green Eagle golf course. Oliver Eidam, Director Brand Partnerships & Sponsoring Porsche AG, handed Siem a symbolic, outsized car key after his fantastic shot.

“Today’s hole in one was my third on the European Tour,” said Siem. “So far, I'd had a handshake and a bottle of champagne - and now, finally, something useful.” 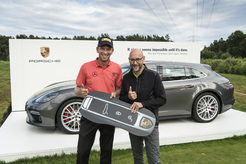 Porsche European Open 2017: Oliver Eidam (r./Porsche AG) hands the car key to Marcel Siem for his hole in one on the 17th