Dramatic show down at the Porsche European Open 2016

Alexander Levy wins in the play-off

Stuttgart/Bad Griesbach. Alexander Levy won the second edition of the Porsche European Open in Bad Griesbach on Sunday. It took a play-off before the 26-year old wrapped up the win against the nine years older Englishman Ross Fisher. Levy clinched victory on the second extra hole and in doing so secured himself the prestigious title at the tournament where two million Euro were at stake. For Levy, it was his third win on the European Tour.

Three shots down on Levy and Fisher in a tie for third place were the two Swedes Michael Jonzon and Robert Karlsson (both -16). The European Tour tournament on the Beckenbauer Course (par 71) was reduced from 72 to 54 holes due to adverse weather conditions. A total of 35,300 spectators watched play over the four days of the tournament.

“We’ve experienced a top class golf tournament with an excellent field of players,” said Andreas Haffner, member of the Executive Board of Porsche AG. “The huge number of spectators around the course and TV coverage in 180 countries are an indication that the Porsche European Open is highly popular amongst golf fans. The players enjoyed the special atmosphere here and also had lots of fun testing our sports cars to the full. Overall, it was fantastic confirmation for our commitment as title sponsor.”

The best German in the field was Ryder Cup player Martin Kaymer (-14) who came sixth. Immediately after holing his final putt, he set off for Linz in Austria. From there Kaymer, accompanied by his Belgian team mate Thomas Pieters and the two vice-captains Paul Lawrie (Scotland) and Padraig Harrington (Ireland), will fly via London to Minneapolis where the 41st Ryder Cup will be played.

Today, the event organisers announced the new dates for the Porsche European Open in the coming year: the 2017 tournament will be held in the week after the Open Championship from 24 to 30 July.

Dramatic show down at the Porsche European Open 2016: Alexander Levy wins in the play-off 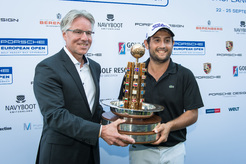 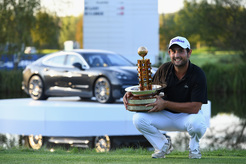 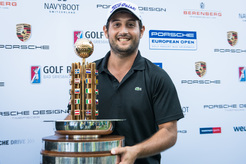 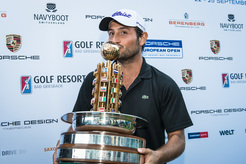