Stuttgart. The Porsche Team is crossing the days off on the calendar until the season’s opening round of the 2015 FIA World Endurance Championship (WEC). Next weekend, April 10 to 12, Silverstone (GB) will be the venue for the first of seven six-hour races in the eight round championship for which the 24 hours of Le Mans is the highlight. In the lead up to the second season since Porsche’s return to top-level motorsport, 30,863 kilometres of testing have been covered with the significantly further developed 919 Hybrid.

The revolutionary WEC regulations, introduced for the 2014 season, demand powerful and innovative hybrid systems, which was the decisive factor in Porsche’s return. The second generation of the Porsche 919 Hybrid has become even more efficient and stronger. Intense development work on the three-part powertrain has allowed Porsche to enter the highest energy recovery class of eight megajoule for the very first time. No other race car turns over so much energy as the Porsche 919 Hybrid – that includes both Formula One cars and other car manufacturers’ Le Mans Prototypes. The art of engineering to bring out hybrid systems with an extreme turn over of energy is highly meaningful for electric road going cars such as the plug-in-hybrid models from Porsche.

Car manufacturers who compete with their class 1 Le Mans Prototypes (LMP1) for overall victories in the WEC are obliged to develop far reaching innovations for hybrid systems. Therefore engineers are given greater freedom than in any other top-class racing series. For the combustion engine, for example, many designs are possible – be it diesel or petrol, normally aspirated or turbo charged, a compact or a high voluminous machine. Alongside the combustion engine at least one energy recovery system is mandatory. More than one is possible. How these systems work and how the energy is stored is also free. But what is rigorously limited is the energy consumption per lap. This goes for fuel consumed as well as for electricity – and both depend on each other. The rule of thumb is: The more electric energy a car produces, the less fuel it may consume. This results in a highly complex cost-benefit calculation for engineers and ultimately creates know-how for Porsche’s future road going sports cars.

The Porsche 919 Hybrid’s two-litre V4-cylinder turbo charged petrol engine is the most compact and efficient combustion engine Porsche has built so far, it is downsizing technology of paramount quality. This engine powers the rear axle with over 500 hp. When the driver recalls the stored energy from the battery, an extra good 400 hp drives the front axle. This way the Porsche 919 Hybrid temporarily turns into a four-wheel drive car with around 1,000 hp system performance.

The 919 is equipped with two different energy recovery systems. One converts kinetic braking energy from the front axle into electricity, the other does the same by a turbine in the exhaust. The latter one makes the Porsche 919 Hybrid the only prototype in the World Championship which also produces electricity when accelerating. The storage for the electricity from both systems is a specifically developed, liquid cooled lithium-ion battery. It can take and release a high amount of energy in a short time (high power density), but can still save a relatively high amount of energy as well (energy density) and comes with a convenient weight. Thanks to a clever design from the monocoque to the power train, the 2015 Porsche 919 Hybrid is lighter and more robust at the same time. In 2014 the car was about 30 kilos heavier than the minimum weight of 870 kilos. Now it matches that limit despite the improved hybrid systems.

Alexander Hitzinger, Technical Director LMP1, summed up the technical challenges: “The switch from the six to the eight megajoule class must be beneficial. To find out if this is the case, you have to take many factors into account and you have to overcompensate disadvantages, otherwise it doesn’t make sense. This means: First, although the lower fuel amount costs combustion engine power, second, although the potential for the energy recovery on seven circuits is smaller than in Le Mans and, third, although some components are heavier, still the lap times must be better because of the additional energy.”

The drivers have now one year of experience with the concept under their belts. Timo Bernhard (Germany), Brendon Hartley (New Zealand) and Mark Webber (Australia) continue to race together and will share car number 17. The sister number 18 car is driven by Romain Dumas (France), Neel Jani (Switzerland) and Marc Lieb (Germany), who also became a ‘bullet proof’ team and drove together in 2014.

Fritz Enzinger, Vice President LMP1, said before the season’s opener: “We’re still a young team, but we finished our debut season with a race win in Brazil and expectations have increased accordingly. We have done intense preparation work for the start of the WEC. The two six-hour races in Silverstone and Spa, plus another two endurance tests, will complete the preparation for the season’s highlight at Le Mans in June.”

- The track’s profile has a good balance. It has neither extreme long straights nor an extreme number of braking points. Aerodynamically at Silverstone a lot more downforce is required than in Le Mans.

- In the race, Dumas/Jani/Lieb had to retire after one hour and 15 minutes because of a technical problem. Bernhard/Hartley/Webber celebrated the first podium at the 919’s maiden race by coming third.

- In 2014 the six-hour race had to be red flagged 24 minutes early because of heavy rain.

Please note: Photo and video material is available for accredited journalists from the Porsche Press Database and can be found at the following address: https://presse.porsche.de. On this website you can also activate the Porsche Motorsport SMS Info Service to receive the latest news and information. The Twitter channel @PorscheRaces provides live updates with the latest information and photos from race tracks around the world. Journalists also have access to the Porsche Motorsport Media Guide on https://presse.porsche.de/motorsport. Porsche Communication provides further content for journalists, bloggers and online multipliers under www.newsroom.porsche.com. 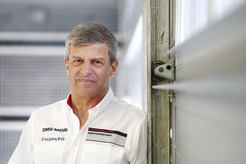 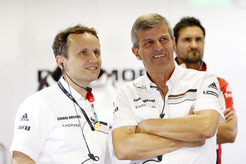 P14_0103: Performance and efficiency: the four-cylinder petrol V engine of the Porsche 919 Hybrid features direct injection, turbocharging and an energy recovery system for the exhaust gases.
2014/03/03

Performance and efficiency: the four-cylinder petrol V engine of the Porsche 919 Hybrid features direct injection, turbocharging and an energy recovery system for the exhaust gases.

The Porsche 919 Hybrid is an example of extreme lightweight design. The chassis and all key body parts are made of carbon fibre.

P14_0100: The hybrid powertrain of the Porsche 919 Hybrid. The V4 petrol engine with direct injection and turbocharging is integrated in the chassis as a mid-engine. The batteries at the centre of the vehicle supply the electric motor at the front axle with energy.
2014/03/03

The hybrid powertrain of the Porsche 919 Hybrid. The V4 petrol engine with direct injection and turbocharging is integrated in the chassis as a mid-engine. The batteries at the centre of the vehicle supply the electric motor at the front axle with energy.