Stuttgart. Porsche AG is supporting the flood relief efforts of the German Red Cross with a donation of 500,000 euros. The money is earmarked for work in the regions affected by the floods in Belgium, the Netherlands and Austria. Partner organisations the Belgian Red Cross, the Rode Kruis and the Austrian Red Cross have been active here since the floods of June 2021. The donation’s focus will be on promoting reconstruction in these regions. In recent months, Porsche AG, together with its subsidiaries Porsche Deutschland GmbH and MHP, has already donated a total of 1.8 million euros in emergency aid to the Aktion Deutschland hilft e.V. alliance to mitigate the consequences of the disastrous floods.

“The willingness to help the affected people and regions, shown by multiple private initiatives, the business community, the public sector and many aid organisations, impresses me greatly. This solidarity sends an important signal to the people on the ground and gives them courage,” says Oliver Blume, Chairman of the Executive Board of Porsche AG. “Now it’s a matter of staying the course. The German Red Cross and its partner organisations in Belgium, the Netherlands and Austria play an important role in this. With our donation, we want to support their work in the long term.”

The Belgian Red Cross, the Rode Kruis and the Austrian Red Cross are planning to support the reconstruction with very different measures. In addition, these organisations are equipping themselves to be able to provide even more effective emergency aid in the event of future disasters.

The Belgian Red Cross, for example, has identified a need for two million euros for the reconstruction of schools and universities alone. This is where Porsche’s donation is to be used. The focus is on upgrading and re-equipping gyms, classrooms, canteens, purchasing school equipment and teaching aids. More than 10,000 pupils and students will benefit.

The Rode Kruis in the Netherlands is already looking to the future again. The donation will be used to bolster its emergency fund. This fund will be used, among other things, to add to the equipment for future missions and to keep emergency vehicles in top condition. In addition, volunteers will be trained so that they can respond quickly and be well prepared in the event of a future disaster.

The Austrian Red Cross is also using the Porsche donation for long-term aid. Among other things, mobile flood barricades are to be purchased. Large, modular drones are also needed in order to better ascertain the overall situation and provide even more targeted support to the operations team. Furthermore, additional mobile and heatable tents are needed – especially for first aid. 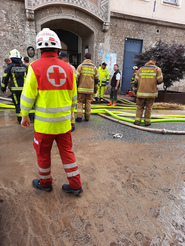