Stuttgart/Prague. Porsche Team Germany will contest the Billie Jean King Cup by BNP Paribas Finals in Prague from 1 to 6 November with a mixture of experienced players and promising youngsters. The team’s number one is the Porsche Brand Ambassador Angelique Kerber. For her, the finals of the most prestigious team competition in women’s tennis is one of the season’s highlights. “We’re in a very strong group with the Czech Republic and Switzerland and we’re definitely not the top favourites,” says the three-time grand slam winner before play gets underway in the Czech capital. “But we’ll be very positive going into the finals and will be battling for every point. Nothing is impossible.”

Alongside Angelique Kerber, the national coach Rainer Schüttler has also nominated Andrea Petkovic and Anna-Lena Friedsam plus the Porsche Talent Team’s Nastasja Schunk and Jule Niemeier for Porsche Team Germany which qualified for Prague by beating Brazil in February 2020. The inaugural finals of the former Fed Cup will be played as a round robin tournament with 12 teams divided up into four groups.

Andrea Petkovic making her 18th appearance for Germany
Having made 17 appearances since 2007 after first being picked for the doubles in the comfortable 4-1 win against Croatia in the World Group II quarterfinals on 21/22 April, Andrea Petkovic is Porsche Team Germany’s most experienced player. She claimed her seventh career WTA title in Cluj-Napoca (Romania) in August and then celebrated her first ever WTA doubles win at the Chicago Fall Tennis Classic. After making her debut in the 3-2 success against Japan in the World Group Playoffs in Toyota on 14/15 July 2007, Angelique Kerber has now turned out a total of 15 times for Germany. The two-time winner of the Porsche Tennis Grand Prix won the Porsche supported premiere of the Bad Homburg Open this summer and then went on to reach the semifinals in Wimbledon and at the WTA1000 tournament in Cincinnati. She also performed impressively at the US Open. Anna-Lena Friedsam has played once for Porsche Team Germany – in the 4-0 win against Brazil in Florianopolis on 7/8 February 2020. This year she secured her second WTA doubles title in Nur-Sultan/Kazakhstan – the first came together with Mona Barthel at the 2019 Porsche Tennis Grand Prix in Stuttgart.

“We’ve been drawn in an incredibly tough group. Even though two of the Czech Republic’s top players have had to withdraw, they’ve still got a really good team,” says Andrea Petkovic. She however feels that Porsche Team Germany is not chanceless: “With Angie and myself, we’ve got two players capable of causing an upset. Angie has had an excellent second half to the season and I’ve also had a pretty good year. We want to go a long way and reckon we’re in with a good chance. But we’re well aware that we’ve been drawn in the toughest group.”

“Jule and Nasti have had a fantastic summer”
Nastasja Schunk and Jule Niemeier are both making their Porsche Team Germany debuts at the Billie Jean King Cup Finals. Supported in the Porsche Talent Team where they are prepared for a career as a professional player, the promising youngsters have recommended themselves for a place in the team captained by Rainer Schüttler. The 18-year-old Nastasja Schunk celebrated the biggest success of her fledgling career when reaching this year’s Wimbledon juniors final. She also won two of the most important ITF tournaments. At the Porsche Tennis Grand Prix, she got a taste of WTA life for the first time and then reached the quarterfinals of the WTA tournament in Karlsruhe, Germany. Her four-year older teammate Jule Niemeier made it all the way to the semifinals at the WTA tournaments in Hamburg and Strasbourg. “Jule and Nasti have both had fantastic summers,” says Rainer Schüttler. “They’ve made unbelievable progress this year.”

Porsche Team Germany will be up against tough opponents right away in the group phase in Prague’s O2 Arena. In Group D, Angelique Kerber and her teammates will take on the Czech Republic on 1 November and then Switzerland on 2 November. The hosts have won the unofficial world team championship title in women’s tennis six times since 2011 – in the 2014 final against Porsche Team Germany which included Angelique Kerber and Andrea Petkovic. Even though two top stars – Petra Kvitova and Karolina Pliskova, both former winners of the Porsche Tennis Grand Prix – are missing, they are one of this year’s big favourites in front of their home crowd. With the reigning French Open champion Barbora Krejcikova and her fellow Tokyo Olympics doubles gold medallist, Katerina Siniakova, in the team, they will still have two of the world’s best in action. Belinda Bencic, the Swiss number one, also became an Olympic Champion.

The Billie Jean King Cup by BNP Paribas Finals
The former Fed Cup has been renamed the Billie Jean King Cup this year. The International Tennis Federation (ITF) thus recognises the efforts of the former American world class player to promote professional women’s tennis and players’ equal rights. The inaugural finals will be played in a new format with 12 top teams divided up into four groups in Prague from 1 to 4 November. Group A: France, Russia (Russian Tennis Federation), Canada, Group B: Australia, Belarus, Belgium, Group C: USA, Spain, Slovakia, Group D. Porsche Team Germany, Czech Republic, Switzerland. Each tie will comprise of two singles and one doubles. The group winners will qualify for the semifinals on 5 November where Group A and C’s top teams will face each other as will the Group B and Group D winners. The final will be played on 6 November.

Porsche in tennis
Porsche has been sponsoring the Porsche Tennis Grand Prix ever since 1978 and has also been the organiser since 2002. In the last vote to take place, the tournament in Stuttgart’s Porsche Arena was chosen by the players as their favourite event in its category. Within the scope of its global partnership with the Women’s Tennis Association (WTA), Porsche is also the title partner of the “Porsche Race to the WTA Finals”, the official qualifying ranking for the WTA Finals. The Stuttgart-based sports car manufacturer is also the exclusive automotive partner of the WTA, the season-ending WTA Finals and of this year’s WTA tournaments in Lyon (France), St. Petersburg (Russia), Berlin and Bad Homburg (Germany), Cincinnati (USA), Linz (Austria) and the two events in Cluj (Romania). As a premium partner of the “Deutsche Tennis Bund” (DTB – German Tennis Association), the company supports Porsche Team Germany in the Billie Jean King Cup (formerly the Fed Cup) and fosters up-and-coming players in the Porsche Talent Team and the Porsche Junior Team. Angelique Kerber, Julia Görges and Maria Sharapova give Porsche a face in tennis as Brand Ambassadors. 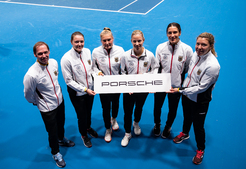 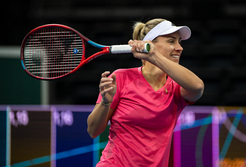 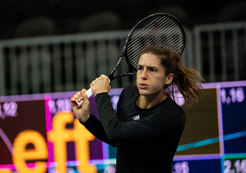 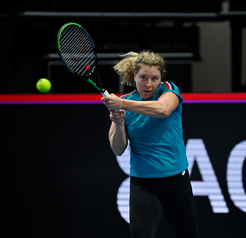 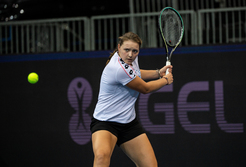 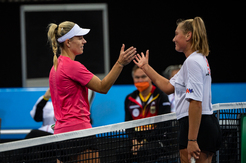 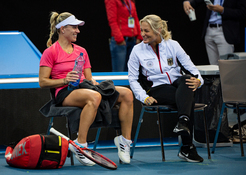