Stuttgart. To this day, one of the greatest success stories of the company Porsche has been the Boxster, which went into series production in 1996 and quickly became a worldwide success. To mark the 25th anniversary of the Boxster, the Porsche Museum celebrates the two-seater family as part of a special exhibition that is now being extended: until September 12, 2021, the Porsche Museum is honoring the history of the mid-engine roadster and its significance for the brand.

A quarter of a century ago, the first Porsche was launched bearing a name on the rear rather than just a number. As a combination of the words “boxer” (engine) and “roadster”, the Boxster was born. Porsche presented the concept study at the North American International Auto Show in Detroit three years before the mid-engine sports car manoeuvred the company out of declining sales figures in the early 1990s as part of a new entrepreneurial strategy. Grant Larson, who designed the exterior and who successfully transferred the Porsche DNA to the roadster, drew his inspiration for the concept study from motorsport and the 550 Spyder and 718 RS 60 cars. Linking the Boxster to the 914 from 1969 was not just the mid-engine concept and associated optimal weight distribution, but also the idea of a lower-priced entry-level model for a younger target group. The goal was to create a two-seater alongside the 911 range that would draw on the components and vehicle concept of a new 911 generation. The open-top two-seater was developed in tandem with this new generation, and also received its tried-and-tested six-cylinder boxer engine. The intelligent carry-over part concept allowed Porsche to return to profitable production.

The special exhibition gives visitors to the Porsche Museum an understanding of the Boxster’s 25-year history. There is also a wide range of information about cars featuring mid-engine technology, which was used back in 1948 in the Porsche 356 “No. 1” Roadster – the first car to be built under the Porsche name. Visitors can feast their eyes on five exhibits displayed on turntables, including a 550 Spyder from the 1950s, the first car Porsche built for motorsport, as well as a 914/4 from 1975, and a 986 Boxster S cutaway model from 1996. On display together for the first time as part of the anniversary exhibition are the historic 909 Bergspyder from 1968, which is the lightest racing car ever built by Porsche at 384 kilograms, and the Boxster Bergspyder. The latter is a tribute to the Bergspyder and was built around 50 years later by Porsche based on the Boxster. This Boxster Bergspyder will also be displayed as part of the special exhibition.

The sports car manufacturer from Zuffenhausen launched the special-edition model “Boxster 25 Years” for the anniversary, which will be limited to 1,250 units worldwide. The absolute highlight for visitors is the Boxster concept study from Detroit, which was built in 1992 and presented in January 1993. In the immediate vicinity, the Boxster 25 Years special-edition model brings visitors to the most recent point in the range’s timeline, and is a fitting way to mark the car's anniversary: a tribute to the concept study from which the first series, and a global success, would later emerge. Among the most eye-catching features of the special-edition model of the 982 generation Boxster is the colour Neodyme, which in its new iteration evokes the exhibit from 1993. A shimmering coppery brown, which created an exciting contrast with the base colour GT Silver Metallic in Detroit, is used on the front apron, the side air intakes, the lettering, and on the two-tone 20-inch alloy wheels. The agile mid-engine roadster is driven by a 4.0-litre six-cylinder boxer engine with a power output of 294 kW (400 PS). The remarkable revving ability of the naturally aspirated engine generates a rich sound and guarantees an especially emotive driving experience.

The Porsche Museum is open from Tuesday to Sunday, 9 am to 6 pm. Due to the current low incidence, it is possible to visit the museum without prior testing or prior registration. An FFP2 mask or medical mask must still be worn throughout the museum building. The Museum provides information on its website www.porsche.com/museum about the current measures and the gradual opening of the visitor programs, which are fully aligned with official regulations. All those who are interested can still take a virtual guided tour through the special exhibition “25 Years of the Boxster” in German and English.
Communications, Sustainability and Politics
Heritage and Porsche Museum
Astrid Böttinger
Phone: +49 (0) 711 / 911 24026
E-mail: astrid.boettinger@porsche.de
텍스트 타입 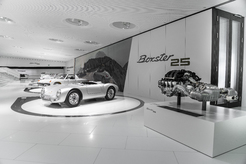 Now on display until September 12, 2021: The special exhibition to mark "25 years of the Boxster". 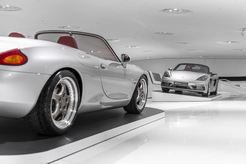 The special-edition model "Boxster 25 Years" pays homage to the study. 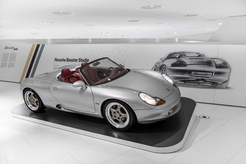 The absolute highlight for visitors is the Boxster concept study from Detroit. 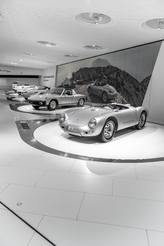 S21_2315: The special exhibition looks back at the Boxster's forerunners and ancestors with mid-engine technology.
2021/06/29

The special exhibition looks back at the Boxster's forerunners and ancestors with mid-engine technology. 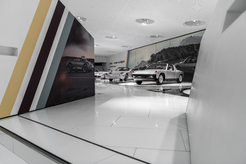 The Porsche Museum in Stuttgart-Zuffenhausen.