Stuttgart. Julia Görges returned to the Porsche Tennis Grand Prix as a social media reporter and fulfilled a long-held wish at the end of an interesting and eventful tournament week by discovering the surrounding Stuttgart countryside in the new Porsche Taycan Turbo S Cross Turismo and on a Porsche eBike Cross.

The German mastered her new role at the world class tournament in the Porsche Arena with charm and professional aplomb. No wonder as the mètier is just as familiar to her as the environs. In 2011, she celebrated the first big success of her career when sensationally winning the Porsche Tennis Grand Prix. Six months after retiring from tournament tennis, she was now out and about behind the scenes of the time-honoured tournament as a social media reporter. The interviews with her former fellow players were an important part of the multi-media tennis experience for the sport’s fans and provided them with interesting insights into the players’ everyday tournament lives.

“I had a lot of fun during the week at the Porsche Tennis Grand Prix,” says Julia Görges. “They were busy days in a new and unaccustomed role and then I just fancied taking some time off.”

The Porsche Brand Ambassador relaxed by treating herself to a first spin in the new Porsche Taycan Turbo S Cross Turismo. “When I want to recharge my batteries then there’s nothing better than going out into the countryside,” she says. “I just love spending time in the nature having fun.” Something she had for certain at the steering wheel of the electrically driven sports car in which she headed off from the Porsche Arena into the countryside blossoming in magnificent colours. On the rear bike carrier designed especially for the Taycan Cross Turismo was a Porsche eBike Cross ready and waiting for a short springtime ride. After arriving in the Stuttgart vineyards, Julia Görges immediately got into the saddle for an e-bike tour through the woods and vines. The eBike Cross is, alongside the eBike Sport, the second premium-quality e-bike from Porsche and was developed jointly by Studio F. A. Porsche and ROTWILD. It is not only the ideal companion for long rides around off-road terrain but is the perfect match for the Taycan Cross Turismo with its timeless design and the high-performance and sustainable drivetrain technology.

The Porsche Taycan Turbo S Cross Turismo in which Julia Görges was touring the countryside, is the main prize for this year’s winner of the Porsche Tennis Grand Prix. No matter which of her former fellow players wins the final on Sunday – she is sure: “She’ll have loads of fun in the car.” 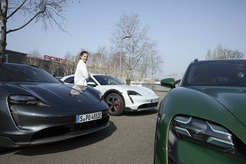 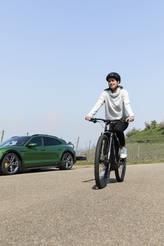 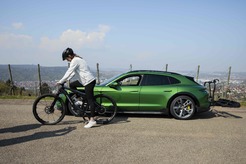 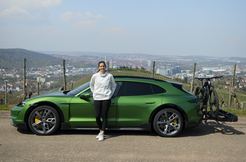