Stuttgart. Four top stars will be contesting the Porsche Tennis Grand Prix semifinals – Ashleigh Barty versus Elina Svitolina and Simona Halep versus Aryna Sabalenka. The two matches in the penultimate round on Saturday will determine the finalists at the 44th edition of the time-honoured Stuttgart tournament. There will definitely be a new winner – a winner that will take reception of a mamba green metallic Taycan Turbo S Cross Turismo as the main prize. The title holder Petra Kvitova was ousted by Elina Svitolina in the quarterfinals whilst the 2018 winner Karolina Pliskova was defeated by the top-seeded Ashleigh Barty.

The first quarterfinal on Centre Court in the Porsche Arena began at 2.00 in the afternoon but Ashleigh Barty was seemingly still half-asleep. In losing the first set 6-2, the Australia overwhelmed by Karolina Pliskova before taking the initiative to even up the match with an equally convincing 6-1 second set. And the rollercoaster continued. In final set, she again needed a long-run up and had her back to the wall when the Czech served for the match at 5-4. However, Ashleigh Barty impressively showed just why she tops the rankings and extricated herself from the perilous position with some great shots to progress to the semifinal after wrapping up the match 7-5 in the third. “It was a great battle, especially in the third set,” said the top favourite who is making her debut at the Porsche Tennis Grand Prix. “I never gave up, fought hard and tried to enjoy the match despite everything. They’re the matches I love.”

Her semifinal opponent Elina Svitolina from Ukraine downed the title holder Petra Kvitova in the quarterfinals after eventually closing out the encounter 6-7 (4), 7-5, 6-2 after two hours 37 minutes. She was forced onto the back foot most of the time by the Czech and, after losing the first set in a tie-break, was soon 5-2 down in the second. The title holder was unable to convert her both first match point and then the second when she was serving for the match at 5-4. The world No. 5 continued battling to break back twice and eventually win a set that she had looked like losing. Her Czech opponent’s resistance was broken even though she herself fended off three match points. Elina Svitolina was still out of breath at the winner’s interview saying: “I expected a hard match but nothing like that. I fought for every single ball and it was the key to winning the match.”

Simona Halep has it easy
Ekaterina Alexandrova was in the quarterfinals by virtue of a surprise victory against Belinda Bencic. However, her winning run was brought to an end by Simona Halep. The two-time grand slam champion and Stuttgart No. 2 seed cruised to a 6-1 first set. Though the world No. 36 from Russia was improving all the time, the Romanian did not have to exert herself too much when taking the second 6-4, also thanks to her excellent serve. The fact that she had lost the last two matches against the Russian was of no importance anymore. “I have learned from the defeats and made her run a bit more,” said Simona Halep who is playing the Porsche Tennis Grand Prix for the sixth time. Looking ahead to the semifinals, she was nevertheless, “glad to finish off the match in two straight sets.”

It was a long semifinals day in the Porsche Arena, one that ended just before midnight when Aryna Sabalenka finally converted her fourth match point to beat Anett Kontaveit 7-5, 4-6, 6-1. The No. 5 seeded Belarusian and the unseeded Estonian, the 2019 runner-up, gave each other no quarter for almost two and a half hours, Even the third set was much closer than the score suggests. “I was under pressure every second of the match and there were lots of emotions of the court,” said the winner. “In the third set, I managed to concentrate better. The semifinal against Simona is sure to be much harder. She won our last match in Dubai. Hopefully I can do better tomorrow.”

Five Germans stood on the court for the doubles quarterfinals on Friday, but things went well for only one of them. Partnered by China’s Yafan Wang, Vivian Heisen, who mainly plays on the ITF Tour, ended the semifinal hopes of Angelique Kerber and Andrea Petkovic with a 6-2, 6-4 win. Their Porsche Team Germany teammates, the title holders Anna-Lena Friedsam and Mona Barthel are also out of the tournament after losing 6-3, 6-3 against Nadiia Kichenom (Ukraine) and Raluca Olaro (Romania).

Service for all the media representatives
Our new media hub containing all the relevant information about the Porsche Tennis Grand Prix like press releases, match results, statistics, audio recordings of press conferences with players and photos is available to journalists via the Porsche press data base at presse.porsche.de/mediahub. Further contents can be found in the Porsche Tennis Media Guide. 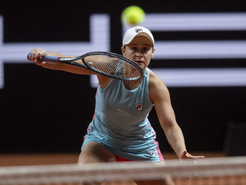 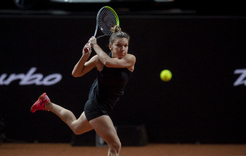 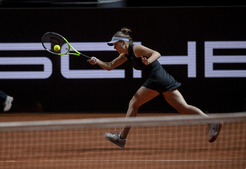 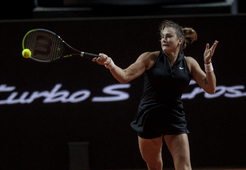