Stuttgart. There is going to be a spectacular start to the main draw matches at the Porsche Tennis Grand Prix. The draw ceremony on Centre Court in the Porsche Arena on Sunday when Julia Görges, the 2011 winner, pulled the names out of the “hat” has produced some highly promising matches in as early as the first round. After winning their way through the preliminary tournament, the qualifiers now face tough-looking matches against some of the world’s top players. The only 17-year old Nastasja Schunk from the Porsche Talent Team, the world No. 972, will start her campaign at the 44th edition of the Porsche Tennis Grand Prix on Monday against Belinda Bencic. World ranked No. 12, the Swiss is one of the favourites. Andrea Petkovic will also face a strong opponent: the Greek Maria Sakkari has already beaten numerous top players this season.

Daunting prospect for Petra Kvitova and Jennifer Brady
With Ashleigh Barty and Angelique Kerber in attendance, the draw for the 44th Porsche Tennis Grand Prix was staged as a part of a stylish ceremony. The first-round pairings drawn with the help of the Porsche Brand Ambassador Julia Görges promise tennis of the highest class right from the very start. The top match is the one between Petra Kvitova and Jennifer Brady. The title holder and two-time Wimbledon champion from the Czech Republic will take on the much-improved American who was the runner-up at the recent Australian Open – no other tournament in the world can offer such a high-class first round match.

Led by the Porsche Brand Ambassador Angelique Kerber, a total of eight German players are in the Porsche Tennis Grand Prix’s main draw field. The 2015 and 2016 Stuttgart winner Angelique Kerber was a full member from the very start and Laura Siegemund, the 2017 winner, was given a direct entry today. Andrea Petkovic is in the line-up after receiving a wild card. Five other Germans earned their right to a place in the main draw via qualifying which was concluded on Sunday. Porsche Team Germany’s Mona Barthel and Anna-Lena Friedsam, the 2019 doubles winners, have qualified as has Nastasja Schunk from the Porsche Talent Team. The day’s biggest surprise was sprung by Julia Middendorf. After losing the first set 6-2 against the far more experienced Tamara Korpatsch, the Porsche Junior Team player pulled out all the stops to take the next two 6-3, 6-0. She duly fulfilled her dream of reaching the first ever WTA main draw of her budding career. Her opponent’s disappointment however did not last long as she was also later given a berth in the exclusive line-up that includes seven Top 10 players as a lucky loser.

Ashleigh Barty pleased to be in Stuttgart
Whilst the qualifying finals were still being played on Courts 1 and 2, Ashleigh Barty and Angelique Kerber teamed up for a practice session on Centre Court. “Up until now, I’ve enjoyed every second in Stuttgart,” said the world No. 1 from Australia who is appearing in the Porsche Arena for the first time. “I love having so many good players around me. I’m pleased to be here and will do my very best.” It is something Angelique Kerber, who is aiming to get off to a good start to the clay court season in Stuttgart, also wants to do. “I’ve trained hard in recent weeks so that I can come here well-prepared,” she said. The lack of fans hurts but the two-time Stuttgart winner also knows, “The fans are here even though they’re only in front of their TV screens. And they are always in our hearts.”

Service for all the media representatives
Our new media hub containing all the relevant information about the Porsche Tennis Grand Prix like press releases, match results, statistics, audio recordings of press conferences with players and photos is available to journalists at the start of the tournament via the Porsche press data base at presse.porsche.de/mediahub. Further contents can be found at media.porsche.com/mediakit/ptgp2021/de in the Porsche Tennis Media Guide. 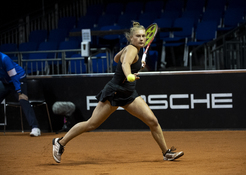 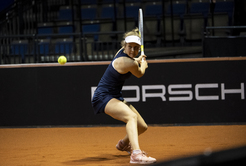 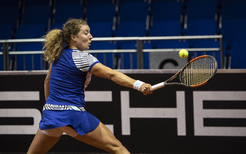 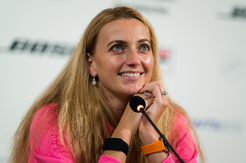 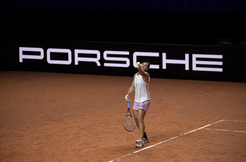