Taking the Porsche 911 GT3 R through the Caracciola-Karussell

Stuttgart. Around 100 starters including numerous Porsche customer teams will tackle the Nürburgring 24-hour race today – albeit without the huge fan base along the Nordschleife. Due to the coronavirus pandemic, the endurance classic must be contested without the legendary crowds in Germany’s Eifel region. Only very few visitors are permitted to take a seat in the grandstands at the Grand Prix circuit. No big parties with beer and singing in the forest, no fireworks, no barbecue smell and no campfire smoke along the spectacular course. The only funfair atmosphere will come from the famous Caracciola-Karussell: The legendary steeply-banked corner at kilometre 13 of the “Green Hell” throws a special challenge at man and machine.

“The Karussell is very famous, but it’s not nearly as popular for us drivers as other sections of the track – although there is no corner quite like it in the world,” reveals Porsche ambassador Timo Bernhard about the extremely slow and steeply banked passage. The five-time overall winner of the 24-hour race, who was assigned to the KCMG driver line-up at short notice this year, adds: “You almost drop down the banked bend with your car, land on concrete slabs and literally shoot out again at the exit of the corner – and this is really tricky – you can’t win a lot of time, but you can lose everything.” After the long high-speed passages and average speeds of more than 190 km/h over the entire lap, the Karussell represents a dramatic change in rhythm. “Many underestimate this section and they pay the price,” warns Bernhard.

“If you think that the Karussell is easy, you’re completely deluded,” emphases Porsche works driver Kévin Estre. “I had to learn how to get through that part as quickly and safely as possible. The 180-degree corner is extremely tight and therefore slow. But the banking ensures that you can take it 30 or even 40 km/h faster than if it were flat – that’s huge,” explains the 31-year-old reigning WEC champion. After a fast right-hander at the so-called steep stretch, the Porsche 911 GT3 R must be braked in hard before the Karussell. The carousel loop, which was concreted in 1932, can be taken at around 95 km/h in second gear. Drivers are subjected to a lateral acceleration of 2g before the Nordschleife winds up to the Hohe Acht.

“You can take different lines and approaches there. I have to admit, I prefer a more risky method: I turn in to the curve as late as possible and sprint out over the berm as early as possible,” laughs Estre, who raised eyebrows in 2019 when he overtook a rival on the grass strip along the Döttinger Höhe straight while doing more than 200 km/h. “The Karussell is really something special. The transitions between the concrete slabs are anything but smooth. The car and driver get really shaken up – just like on a carousel at a funfair. It’s very difficult to keep the throttle pedal constant. The car jumps, skips sideways and sometimes even bottoms out.”

Given the many quirks of the Nordschleife, the 500+hp GT racers from Weissach require a setup different to that for a conventional circuit. The crests where cars become airborne, the high kerbs and the Karussell need a lot of ground clearance. “We always drive on the Nordschleife with a minimum ground clearance of 70 millimetres,” explains Sebastian Golz, Project Manager of the Porsche 911 GT3 R. “The Karussell requires this, but so do the crests like the one at the Flugplatz. The vehicle touches the concrete slab slightly but the damage to the underbody is virtually zero. Exiting Karussell is far more critical, because depending on the line you take, you are subjected to huge forces there.”

Drivers instinctively aim to spend as little time as possible on the “bumpy strip”. The consequence: a less than gentle handling of the car when exiting the corner. “I admit, I’m a fan of shooting out early,” says Estre. “It saves time, but it stresses the material. That’s why I drive this line pretty much only in qualifying. In the race over 24 hours, the stresses on the powertrain components would probably be too high.” For this reason, the technicians are not too worried about positioning the vehicle on the outer edge of the Karussell. “When the car briefly loses traction when catapulting out, lands back on its wheels at full revs in second gear and suddenly gains grip, the torque on the driveshaft is very high – this has a significant impact on the material,” outlines Golz. The experienced engineer adds: “If something like this happens at the Flugplatz jump at a much higher speed and in a higher gear, it doesn’t matter. But at the Karussell it does.”

For many drivers, the Karussell experience on the Nordschleife can be compared to an amusement ride at a funfair – especially when it comes to the little tricks when tackling the merry-go-round corner. “It’s best to keep the front left tyre on the very inside of the narrow strip of asphalt. This allows the car to ‘slingshot’, so to speak, creating a natural rotation. It’s like a handrail on a ride and that’s the trick,” laughs Timo Bernhard. Kévin Estre adds: “If that doesn’t work and the car is a little too fast there, it flies out of the banked corner and crashes into the barrier. It’s happened to quite a few drivers who were too cocky in the Karussell.”

Nürburgring 24 Hours: Taking the Porsche 911 GT3 R through the Caracciola-Karussell 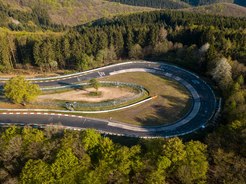 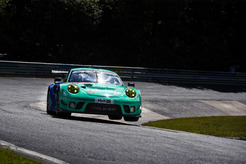 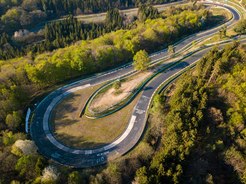 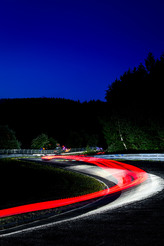 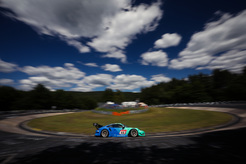 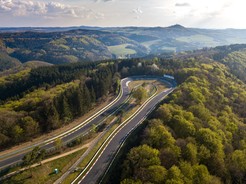 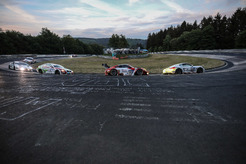 Traffic in the Caracciola-Karussell: overtaking impossible 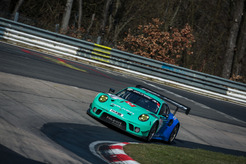 The small asphalt strip on the inside provides more grip 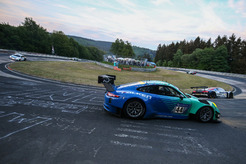 The outer racing line is used only when in trouble 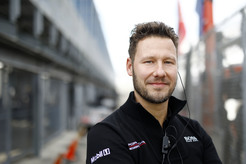 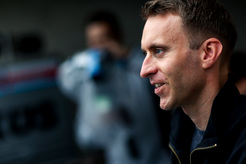 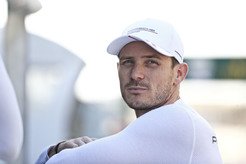 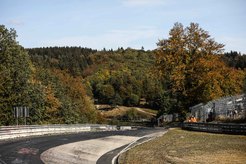 The surface changes from tarmac to concrete 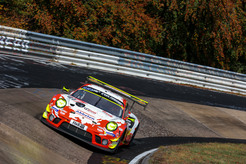