Stuttgart. The Porsche Taycan is celebrating its US premiere at the LA Auto Show on 20 November 2019. The all-electric, four-door sports saloon offers the performance and connectivity expected of a Porsche, with everyday usability. Highly advanced production methods and the Taycan’s capabilities are setting new standards in the fields of sustainability and digitalisation. Taking centre stage on the Porsche stand will be the new Taycan 4S, which now becomes the starting point of a range that has until now only consisted of the Taycan Turbo and Taycan Turbo S. The Taycan 4S is available with two battery sizes: The Performance Battery generates up to 390 kW (530 PS), while the Performance Battery Plus delivers up to 420 kW (571 PS) overboost power.

“A year ago we introduced the new generation of the 911 in Los Angeles,” says Oliver Blume, Chairman of the Executive Board of Porsche AG. “Now we follow up with the Taycan – the first all electric sports car from Porsche. California has been like a second home for Porsche for many decades. It’s where the world’s biggest 911 fan base is. With the Taycan we connect our past to the future and we will continue the Porsche success story.”

In addition to the Taycan, Porsche has also chosen the LA Auto Show as the location for the US premiere of the new Macan Turbo. With 324 kW (440 PS), it assumes flagship status among Porsche compact SUV sports cars. In parallel with Porsche’s debut in Formula E on 22 and 23 November 2019, the Porsche 99X Electric, the brands first all electric racing car will also be on display at the LA Auto Show.

Breathtaking acceleration, sports cars traction and outstanding continuously available power – the Taycan’s strengths also apply to the 4S. The permanently excited synchronous motor on the rear axle has an active length of 130 millimetres, which makes it exactly 80 mm shorter than that in the Taycan Turbo S and Taycan Turbo. With motors on the front and rear axles to facilitate all-wheel drive, as well as a two-speed transmission on the rear axle, the drive architecture of the 4S comprises the same main technical highlights as its siblings. This also applies to the car’s intelligent charging management and impressive aerodynamics: with a Cd value from 0.22, the aerodynamics make a significant contribution to low energy consumption and boost range.

With its clean, purist design, the Taycan signals the beginning of a new era. At the same time, it retains the unmistakable Porsche design DNA. From the front, it looks particularly low and wide with highly contoured wings. The silhouette is shaped by the sporty roof line sloping downward to the rear. The highly sculpted side sections are also characteristic. The sleek cabin, the drawn-in rear D-pillar and the pronounced shoulders of the wings result in a sharply emphasised rear that is typical of the brand. There are also innovative elements such as the glass-effect Porsche logo, which is integrated in the continuous light bar at the rear.

The cockpit also signals the start of a new era with its clear structure and completely new architecture. The free-standing, curved instrument cluster forms the highest point on the dashboard. A central 10.9-inch infotainment display and an optional passenger display are combined to form an integrated glass band in a black-panel look.

Porsche uses a centrally networked control system for the Taycan chassis. The integrated Porsche 4D Chassis Control analyses and synchronises all chassis systems in real time. The Taycan 4S features adaptive air suspension with three-chamber technology including PASM (Porsche Active Suspension Management) electronic damper
control as standard. It is also equipped as standard with red-painted six-piston aluminium monobloc fixed-caliper brakes at the front and four-piston aluminium calipers at the rear. The internally vented cast iron brake discs have a diameter of 360 mm at the front and 358 mm at the rear.

With the optional Sport Chrono package, the car sprints from zero to 100 km/h in 4.3 seconds – three-tenths faster than before. The car’s top speed is 270 km/h, which is an increase of four km/h. A highlight of the upgraded chassis is the high-performance Porsche Surface Coated Brake (PSCB) system that is fitted as standard. Thanks to a thin tungsten carbide coating, it produces up to 90 per cent less brake dust compared with conventional cast iron brakes.

Externally, the Macan Turbo is characterised by the styling trends of the revised model generation. The new range-topper also sets itself apart thanks to unique accents such as the Turbo-specific front end and the fixed roof spoiler with its double-wing design.

Porsche 99X Electric: First race in Formula E in parallel with the LA Auto Show
After more than 30 years, Porsche is returning to formula racing. With the Porsche 99X Electric, the company is establishing a works presence in the 2019/2020 ABB FIA Formula E Championship. The associated reorganisation of motorsport commitments is derived from the Porsche Strategy 2025 plan, in which both purist GT road-going sports cars and all-electric sports cars feature. A presence, and indeed success, in motorsport with electrically powered racing cars is an important part of the company’s “Mission E” strategy.

The Porsche 99X Electric will also serve as a development platform for future all-electric production road cars. The centrepiece of this fully electric racing car is the Porsche E-Performance Powertrain, the development of which has played a central role from the start. The Formula E regulations stipulate a standard chassis and battery, while the drive technology is developed by the manufacturer.

In mid-October, the TAG Heuer Porsche Formula E Team completed three days of intensive testing on the Circuit Ricardo Tormo near Valencia. This was the first time on track with all the other teams competing in Season 6 of the ABB FIA Formula E Championship 2019/2020 and it provided valuable experience for the works team and its two regular drivers, Neel Jani and André Lotterer.

The first two races for the TAG Heuer Porsche Formula E Team take place at the Diriyah E-Prix on the outskirts of Riyadh (Saudi Arabia) on 22 and 23 November 2019.


Porsche in the USA
The USA is the second-biggest market for Porsche. In 2018, the company delivered more than 57,000 vehicles there, which represents nine years of growth in succession. The trend in the current fiscal year is also positive, with a six per cent increase in year-on-year deliveries to 45,062 units in the first nine months.

The Porsche press conference from the LA Auto Show will be broadcast live on NewsTV.porsche.com on 20 November from 7:50 pm to 8:15 pm (CET).

The consumption and CO2 emission values were calculated according to the new Worldwide Harmonised Light Vehicle Test Procedure (WLTP). The NEDC values derived from this must continue to be specified for the time being. These values cannot be compared with the values calculated on the basis of the previously used NEDC test. 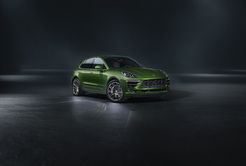 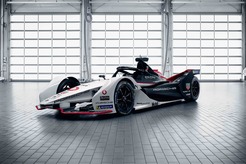